Vigevano: years of economic boom, benzol, and other stories

Lights and shadows on the historic capital of footwear in the Sixties, between the golden years and the beginning of its long rise to success. This is the basis for “Vigevano during the Boom. Shoes, benzol, and other stories” written by two journalists (Filippo Caserio, author of various books and monographs based on local history, and Alessandra Ceriani), published by the Astrolabio Cultural Association and by the Punto & Virgola publishing house in Vigevano with the contribution of the Foundation of Piacenza and Vigevano and the sponsorship of the City of Vigevano 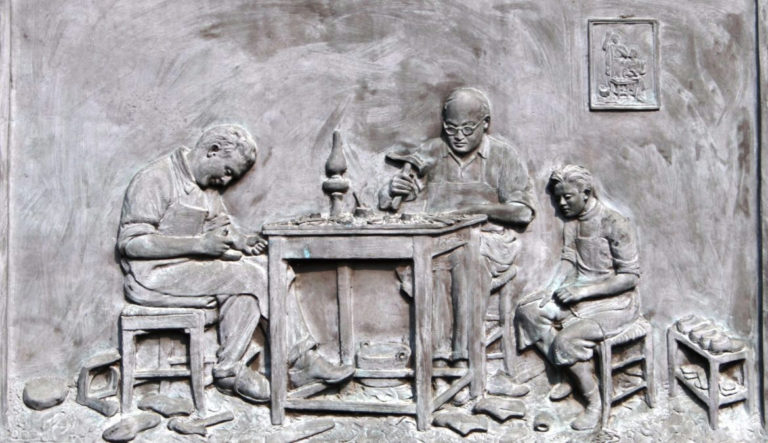 The city of “one thousand factories, and no bookstores” – is how a then novice journalist Giorgio Bocca described Vigevano, in a famous reportage that appeared in January 1962 in the daily newspaper “Il Giorno” – with its 970 footwear manufacturers and countless number of small workshops situated in basements and even in kitchens, from which the incessant sound of hammering of the many pieceworkers could be heard. In the early Sixties, this city was in fact at the height of its success with a production of 90 million pairs. However, already in 1964, its slow and unavoidable descent would begin, leading eventually to it loss of leadership in the sector, with some of its footwear manufacturers going out of business, while in 1969, the International Fair-Market of Footwear moved from the by now ancient and unsuitable venue of the Vigevano Palazzo Esposizioni to the Fiera di Milano complex, where it is held under the present-day name of Micam. “Vigevano during the Boom” accordingly focuses on 1962, the year when the “benzol scandal”, the white plague that already in the Thirties and Fifties had created a number of victims in Vigevano, came under the eye of the national and international press. Tenacio, a glue that contained the harmful chemical substance, benzol, which had already been banned in other European countries, was still allowed in Italy and was widely used both by factories and at home by pieceworkers in their basements, for its strength and low cost. The giuntöre and workers who were subject to inhaling the fumes (especially those working in confined areas) were at risk of developing light symptoms like dizziness, headaches, difficulty breathing, tiredness and nausea, but also serious diseases like aplastic anaemia and leukaemia. The investigation undertaken by Filippo Caserio and Alessandra Ceriani also looks at the enormous news coverage given over to the problem by the national press, in some cases a disproportionate amount of attention, which triggered off a degree of alarmism that pushed some store owners to even put the sign “We do not sell shoes from Vigevano” in their store window. This uproar however eventually led to the Soliano law in March 1963 (proposed by Vigevano parliamentarian Francesco Soliano) which, although it did not resolve the issue, in any case drastically reduced the amount of benzol allowed (2%). Nevertheless, “there was leftover stock to finish” and even after the law went into effect, it was still used until the historic union battles at the end of the decade and the Statute of Labourers changed the whole scenario. Starting in 1963, with the drop-off in Vigevano production, also the number of deaths caused by benzol fell, and today, there’s little or no memory of it: a past cancelled out, which the book does its best to recall by giving voice to those who bore witness to it, the survivors. For those who did not survive, there is the epitaph of Lucio Mastronardi: “The graves of Vigevano’s cemetery are filled with those who died from benzol poisoning”.

The book ends with the most important historic moments (both national and local) occurring during the 1960-69 decade, along with a DVD documentary where those who were present in that era are interviewed and also describe what Vigevano was like in the Sixties: the thick fogs, the Castle-prison, the ex-Tettoie, and the amusement park. There are then the shoes and fads made famous by the trilogy by Mastronardi (The Cobbler, The Master, and the Southerner of Vigevano). The investigation on benzol. The great local celebrities, Lucio Mastronardi and Vito Pallavicini (in the Sixties the soul of the L'informatore, the weekly Vigevano publication, and songwriter of great success with “Azzurro”), who during the decade under examination both reached the height of their fame.

Where to find Vigevano during the Boom