The most innovative stores in fashion

The healthcare emergency has changed the purchasing habits of consumers, who have become used to home shopping and digital, while it has accelerated many changes already underway in physical retail, with the creation of innovative stores guided by digitalisation, personalisation, and experiential purchasing. 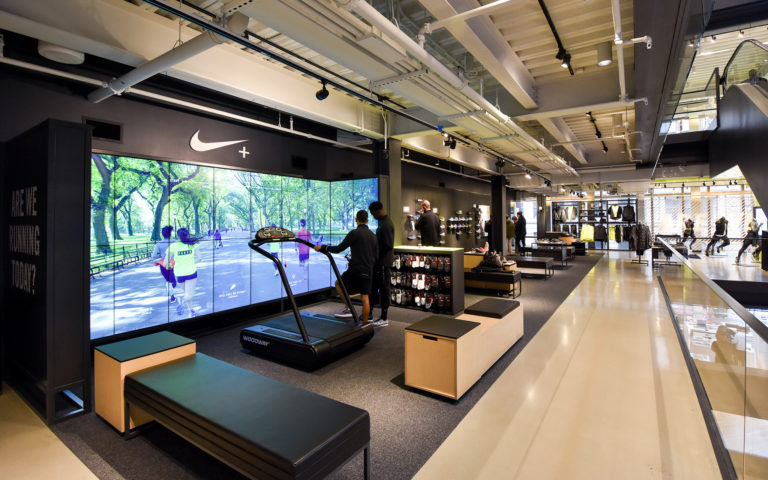 With a large part of the time spent at home because of the lockdown and restrictions on movements and day-to-day activities, consumers have changed their purchasing habits, leading to an acceleration in changes already underway in society and in retail, with a leap forward into the future – which according to experts – has occurred five years ahead of time. In the Post-Covid era, home shopping has become the ‘new normality’, while the physical store has increasingly become connected to the digital one, with a parallel movement towards the use of omnichannels. In this new scenario, also the appearance and role of brick-and-mortar retail has naturally changed, with an increasing orientation towards digitalisation, increasing proximity to the individuality of consumers, and with a ‘shopping experience’ proposal that is unique and engaging.

Among the most innovative stores that have known how to receive and best interpret the new needs of the post-pandemic consumer are ‘community-stores’ like Nike Unite, inaugurated this past November by the giant American sportswear brand – with three stores in the United States, one in Great Britain, and one in South Korea – conceived with the aim of getting closer to the local territory and community by personalising the store to reflect the city in which it is located. The interior design is in fact characterised by visual references to the local community and throwbacks to its history, sports teams, and athletes. The fittings rooms feature local maps that invite visitors to the store to explore the surrounding areas of the city where it is possible to practice sports, like for example the parks, while employees are all residents of the area and are trained to be coaches. Plus, with the Made to Play programme, Nike supports local schools and non-profit associations with the aim of encouraging play and sports among kids with fewer possibilities. The aim of these new stores is to create a strong sense of belonging and community, while at the same time transmitting the values dear to the brand and its identity.

Following a ‘local’ direction are also important names in retail like the luxury department stores of London-based Selfridges London, which has presented a special selection of local brands to UK clientele, or Song for the Mute, the brand chain that focuses on local artisanal products. Among the most important trends affecting physical retail is undoubtedly that of experiential purchasing, with the proposal to the consumer representing a unique and fulfilling ‘live’ experience, which is impossible to find in online purchases. Among the most active brands in this segment, we once again find Nike, which recently opened a larger flagship store (5,100 square metres on five stories) in New York, focused on running and basketball, where the customer has the opportunity to enjoy a unique and engaging experience, thanks to the design and visual merchandising rich in stimuli, with blow ups of leading NBA champions, displays and interactive screens that recount some of the iconic products of the brand. Standing out in particular is a dedicated basketball court for trying out basketball shoes with kinetic sensors that capture movements and display them on a massive screen.

Going in this direction is also the opening of themed pop-up stores like those of the American brand of casual outerwear and apparel, Holubar, which became famous for the legendary parka worn by Robert De Niro in The Deer Hunter. To celebrate its 75th anniversary, it has opened a pop-up store with bistro in Paris created together with Merci in the Le Cinéma Café. There is then the temporary store HOLU-BAR, open until 18 March 2021, which allows for mountain experiences in the city, with mulled wine, hot chocolate, fragrant spices, and tantalizing dishes that recreate the atmosphere of the Colorado Mountains where the brand was founded in 1947.

In the spirit of immersive experiences, next are the Gucci Pin temporary pop-up stores conceived to create a connection with customers that goes beyond the simple act of purchasing, fully recounting the new projects of the designer label, like the new collaboration with The North Face, which made its debut in Milan, Italy, in 2021. Inspired by the mood of the Gucci – The North Face collection, which celebrates a spirit of discovery and adventure – both real and metaphorical -, the Milan pop-up store is characterised by a use of materials and shapes that generate geodesic structures and curves, with travel trunks and spotlights recreating the starry vault of the sky as seen from inside a tent. At the same time, interactive experiences guide the visitor along a pathway of adventure and highly imaginative memories, with QR codes that reproduce the sounds of nature in Spatial Sound. Exploration in all of its many forms and interaction between real and virtual environments are also celebrated by PokéStop Gucci, realised in collaboration with the company of augmented reality, Niantic, offering the possibility of trying on three articles virtually, which are then made available to users visiting these stores.


The ‘shopping experience’ is once again the protagonist of the young men’s lifestyle store Usereserva.com, opened a few years ago in Rio De Janeiro. The store is conceived as a showroom where products are on display, but are not for sale, since clothing, shoes, and accessories can only be seen and ordered from the digital catalogues present in the store or directly from the site. Once ordered, they are then delivered within 3 hours to your destination of choice. The space is also conceived as a place for social intermingling and entertainment, and in fact, at the store’s entrance, there is the proud declaration: ‘Point of sale: no. Meeting Point: yes!” Here, customers can spend hours relaxing with their friends, drinking a coffee at the café, playing pinball, or revamping their look at the barbershop. And for customers who love the store’s furnishings, the technical blueprints for constructing it themselves in their very own homes are even available on the site!


Even legendary British retailer Marks & Spencer has set its sights on temporary pop-up stores that allow consumers to have a striking purchasing experience. This past November in fact saw the inauguration of three Christmas pop-up stores in Dubai, with red stands in a perfect Christmas style surrounded by Christmas trees and ornaments, where it was also possible to purchase and taste meat pasties, puddings, cakes, and much more.

It’s precisely large-scale retail stores that have been at the centre of a serious crisis in recent years, and the extreme changes triggered off by Covid has strongly accelerated this trend, forcing them to update their product policies and proposals in order to survive. The historic Galeries Lafayette department stores, for example, recently inaugurated a new flagship store on the Champs Élysées that proposes a mixed offering to clientele that includes not only emerging stylists, but also Instabrands’, that is to say brands that were launched thanks to the visibility of Instagram and online sales.

When it comes to innovative stores, not to be forgotten is Rose Bikes, the German historic producer and retailer of bicycles and bike accessories, which in 2016, completely renewed its flagship store of 6,000 square metres – Rose Biketown in Bocholt, Westfalia – integrating the online experience with the physical one. Here, it is technology making the big difference, and this is true to the extent that it is possible for customers to configure their preferred bike online, and then finish it in the physical store (or vice versa). In the store, a service for measuring feet size and trying shoes on virtually is available, and it is likewise possible to test glasses in a wind tunnel so you can ensure they are perfectly adapted to fit your face. Naturally, the layout of the store and the display of the products communicate a great passion for bicycles to the consumer, and all the sales personnel is highly competent and ready to provide advice and recommendations for eventual purchases.

Instead, going in the direction of personalisation, is the project of luxury sneaker brand Golden Goose LAB, which in 2019 debuted in Milan. Offering the consumer a unique experience in the spirit of craft workmanship and creativity, it allows for the customisation of sneakers in accordance with individual preferences and tastes, thanks to the consultancy services of an artisan, who helps clientele choose colours, finishes, and accessories. This same policy has also been adopted by the giant in sportswear, Adidas, which had proposed the Knit for You pop-up store in its store in Berlin between December 2016 and March 2017. Based on the personalisation of wool sweaters designed by the customer and tried on via a body scanner, the final product is then created within an arc of two hours. Finally, not to be forgotten is the already cited pioneer Nike, the first brand to have introduced personalisation years ago, which in its flagship store in NY offers its customers ‘Nike by NYC’, a workshop for personalising shoes with delivery in only 3 days’ time.