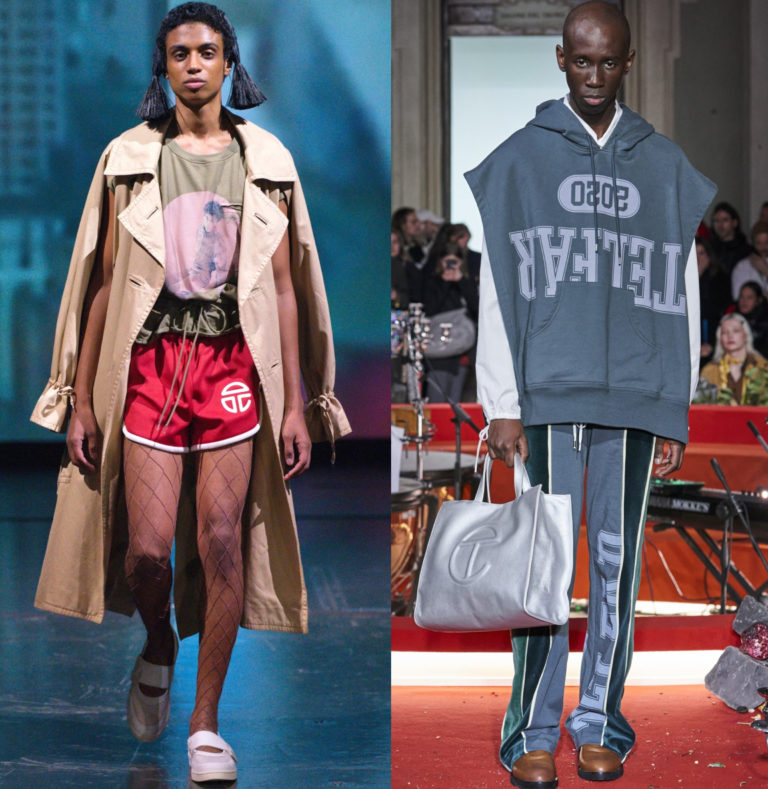 More than a brand, it is a breath of fresh air: a concept of global community, united and without conflicts, that wears accessible and totally inclusive clothing.Telfar Clemens was born in 1985 in Queens, New York, to Liberian parents. He spent part of his childhood in Liberia before returning with his family to the United States in 1990. As an teenager, he was inspired by his grandmother and aunt’s manual skills and became obsessed with the world of fashion, also because he couldn’t find clothes suitable for his needs in the stores, so he created them himself. His aesthetic is based on a balance between men and women’s clothing, defining the style that we now call “gender fluid”. In 2002, he moved to New York to pursue a career as a model and DJ. In 2003, he began to create his first collection of reconstructed vintage clothes which he sold in boutiques on the Lower East Side and in Soho in New York.In 2005, he launched TELFAR, a label that celebrates the queer aesthetic but defines itself as totally unisex, which he decided to present in an unconventional way in nightclubs and museums such as the Guggenheim and the Biennale of Contemporary Art in Berlin and Venice. In 2017, he won the CDA/Vogue Fashion Fund Award, receiving a prize of $400,000 which he invested in making his brand more global. From this turning point, his success was exponential, so much so that immediately afterwards the brand was picked up for distribution in some of the finest boutiques in the world such as the Galleries Lafayette, Barneys, Ssense, Luisaviaroma and Dover Street Market. He then became a finalist in the Accessory Designer of the Year Category at the CFDA Awards in 2019.The brand transcends fashion and mixes with communication, music, contemporary art, and design. And the choices of Telfar prove this: its models/testimonials include Shayne Oliver (ex-boyfriend and designer of Hood by Air), as well as musicians Kelela and Dev Hynes (alias Blood Orange). He dressed Solange and her team of dancers and musicians for the acclaimed performance at the Guggenheim Museum, in January 2020 he was invited to show at Pitti Uomo 97 as a guest designer and he created a special collection for the White Castle fast food franchise, designing the uniforms for its 10,000 employees and a series of special T-shirts, whose proceeds went to a bail fund for minors in Rikers Island prison.Over the years, Telfar has collaborated with FILA, Reebok, Opening Ceremony, Budweiser, Converse and other noted brands. He says of these collaborations: "I want TELFAR to have a mass appeal, in an almost frightening way. Think of those Michael Kors’ bags: everyone has one. And I want to be like Michael Kors, but on purpose.” He seems to have succeeded: the most popular bag of the moment is his tote with an essential design and square shape, embossed TC logo and a very practical shoulder strap and handles, already nicknamed the “Bushwick Birkin.” It’s almost impossible not to have seen it yet, as it is spreading like wildfire on social media and celebrities like Bella Hadid, A$AP Ferg, Selena Gomez, Dua Lipa and democratic representative Alexandria Ocasio Cortez have been spotted with the bag. However, this one differs in several points from other IT bags. First of all, in terms of price, because the goal is to offer an affordable item on a large scale. However, its primary purpose is to create a symbol of belonging to a specific community and not a social class. If today it seems almost mundane to talk about fluid and genderless fashion, inclusive castings that feature models of all ethnicities and the "see-now-buy-now" concept, we owe it to Telfar Clemens, who proved to be a pioneer of what we could define as key issues of the fashion system, but that until recently they were nothing more than an expression of his personality.