In hindsight, this is how the fashion shows of Marine Serre and Richard Quinn shows were branded at their respective Fashion Weeks last February. Far from being medical in nature, the haute couture masks were the shock accessory on the F/W 2020 runways. 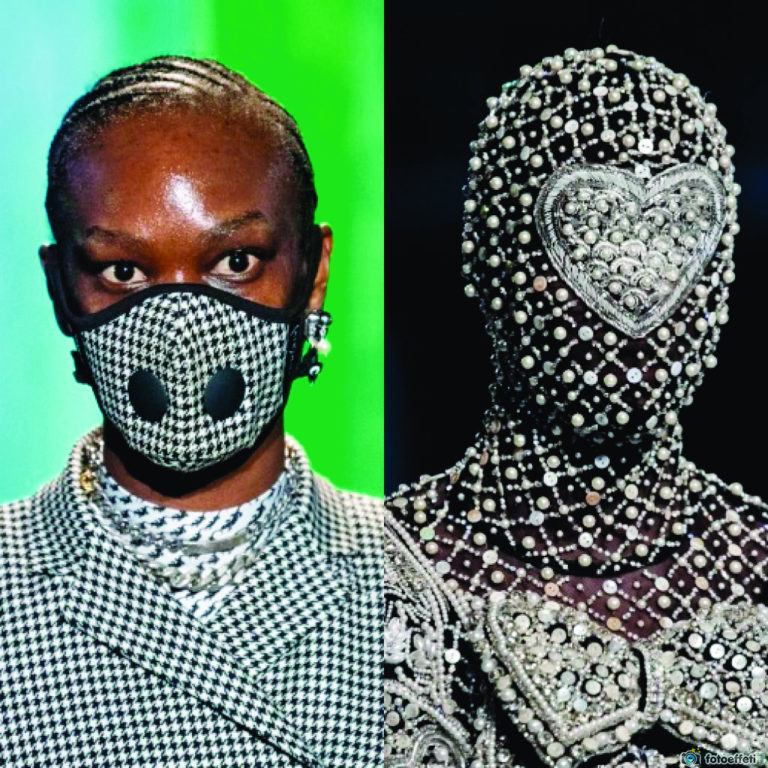 The last fashion month was full of bold accessories, from luxurious AirPods cases to fur fringed bags. Perhaps the most shocking and in retrospect harbingers of disturbing scenarios, were the rhinestone, latex and fabric masks that protected/covered the faces of the models, creating some of the most memorable looks. The logoed mask in particular was already experiencing a boom in popularity in the Western world before the spread of the COVID-19 virus. In Asia, they have long been part of the daily wardrobe – not only as a protection against pollution in countries such as China and Japan, but above all as a hygienic courtesy towards others.However, face masks are nothing new in the collections of Marine Serre (a modern Cassandra?), very well known among Asian fashionistas. The French designer was even more daring this season with sparkling masks that accessorised fancy dresses. The style of the emerging brand can certainly be seen as another recent attempt of fashion to respond to the need for a pragmatic utilitarism. It’s no coincidence that “what will I need tomorrow?” is one of the key questions that the young French designer asks herself before she starts creating. Marine Serre's collection is a highly original encounter between the sophisticated French style and athleisure, mixed with eco-futuristic streetwear elements.The designer has come a long way since she graduated from La Cambre School of Art and Design in Brussels, founding her own brand in 2017 and winning the LVMH Prize the same year. She now has a prestigious fashion house and four lines to better distinguish the different types of products. However, she hasn’t let herself be tamed by commercial pressures, but continues to pursue her personal interpretation of sustainable fashion, based as much as possible on the reuse of materials. She uses a wide range of them, besides Lycra and silk, she is not afraid to play with velvet, denim, plastic and leather: even the most prized materials are coupled with young and fresh silhouettes. Her most obvious inspirations are Alexander McQueen, Maison Margiela, Dior and Balenciaga, where she worked before embarking on her own project, but Serre has crystal-clear ideas and her mission seems to be to break down the barriers between ready-to-wear, haute couture, tailoring and sportswear.Richard Quinn’s bold prints and voluminous silhouettes also caused quite a stir at the London Fashion Week. Coupled with masked androgynous figures on the runway, they dazzled audiences with a sensory overload coming from the colourful floral outfits in the style of Dior’s 'New Look' and the surprise effect of coordinated fetish masks or ones studded with pearls and crystals. The visual story of the designer, who also debuted menswear proposals, unfolds in an aesthetic made up of couture suggestions pervaded by a transgressive spirit. “I thought about how women’s and men’s clothes can interact with each other,” explained the designer backstage at the fashion show. “I started from the quintessential British style and then worked on the contrasts between the dark accents, the sensuality of latex, the large floral prints, the harmony of most sophisticated pieces.”After graduating from Central Saint Martins in London, Richard Quinn made his debut in 2016 receiving immediate public and critical acclaim. The “botanical” total looks, theatrical silhouettes and use of bold materials such as PVC and latex immediately made him stand out for his innovative approach that combines undeniable tailoring skills with a remarkable couture sensibility. One of the most prominent figures to have graced the front row of his shows was the Queen of England, who in 2018 awarded him with the first “Queen Elizabeth II Award for British Design" as the best emerging designer in the UK.