Made in Italy meets up with Russia and the CIS area

It is with a feeling of great expectation that Italian footwear manufacturers look to the up-and-coming trade fairs in Ukraine, Kazakhstan, and Russia, with La moda italiana in Almaty, La moda italiana in Kiev and Obuv mir Koži in Moscow, all areas that continue to be characterised by negative sales trends.

secret: for a number of seasons now, Italian footwear exports towards Russia and its surrounding territory have been characterised by a downtrend, and this has been reconfirmed also at the beginning of 2019, recording a -14% drop in volume and value, with Russia decreasing by -21.3% in quantity, Ukraine at -4.1%, and Kazakhstan even down by -30%. While economic instability plays a role that is not secondary in Kazakhstan and Ukraine, in Russia this trend is due above all to the polarization of the market, with a subsequent fall in the mid-range segment, which is where Made in Italy positions itself. “The markets of Russia, Ukraine, and Kazakhstan are still characterised by some difficulties, – confirms Giampietro Melchiorri, Vice President of Assocalzaturifici responsible for the Russian and CIS markets

– However it’s still too early to tell if the trend will persist or if there will be a reversal. In any case, businesses are continuing to confirm their participation in the events organised by Assocalzaturifici because they consider them to be the best tools for presiding over these markets”.

Kicking off the series of fairs in this region will be La moda italiana in Almaty, in Kazakhstan, at the Dom Priemov from 2 to 4 October, followed by La moda italiana in Kiev, in Ukraine, to be held at the Hotel Intercontinental from 7-8 October. Organised by Assocalzaturifici in collaboration with EMI Ente Moda Italia, for the last few seasons the formula of the fairs has been dedicated to the total look, presenting a selection of footwear, leather goods, and apparel. During the March editions, these fairs attracted more than one hundred operators to the economic capital of Kazakhstan and more than 200 to Kiev.

Ending the sales season will instead be Obuv mir Koži, the event that will be held at Moscow’s Expocenter from 21 to 24 October. Organised by Bologna Fiere in collaboration with Assocalzaturific 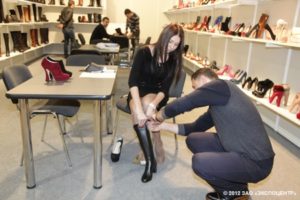 i, it will see the participation of around 130 Italian companies, which according to the predictions made by the organisers, will meet up with a public of 12 thousand operators including retails chains, wholesalers, and owners of boutiques coming from all of Russia’s regions and 25 neighbouring countries.

Important support will be provided to the exhibitors by the ICE Agency which, in partnership with Assocalzaturifici, will organise different incoming services at each event meant to attract foreign buyers, while also undertaking actions aimed at supporting business.