Future Fashion: the future of fashion is already a reality

The winning project of the contest ‘Innovation Village Retail’ of Expo Riva Schuh & Gardabags, was a 100% ‘Made in Italy’ fashion-tech start-up platform, which helps brands cut back on production costs and times, while also becoming more sustainable and innovative through 3D virtualization and projecting them directly into the future of the metaverse. 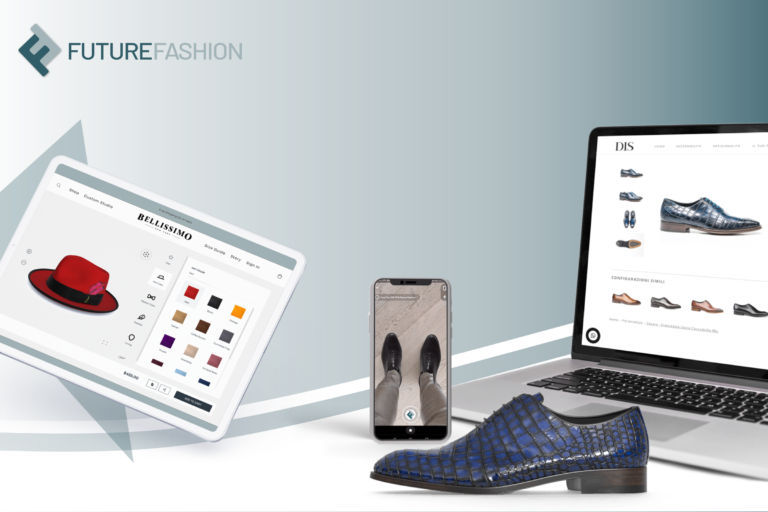 Future Fashion is the proudly ‘100% Made in Italy’ platform, which won the first ‘Innovation Village Retail’ of Expo Riva Schuh & Gardabags contest dedicated to the most innovative fashion retail realities. A young project destined to revolutionize the footwear and fashion industry; it allows brands to ‘virtualize’ their collections through the creation of 3D models that can be “worn” by their customers through augmented reality applications. We spoke of this with Andrea Carpineti – CEO and Co-Founder of Future Fashion.

First of all, what is Future Fashion?

It’s an innovative fashion-tech start-up, founded with the aim of helping fashion brands be more sustainable and innovative, while at the same time reducing costs associated with the creation of samples and improving the customer experience with product personalisations. All this through a directly owned technology that allows for the creation of 3D models based on simple photo references so the business can create a 360° view of the shoe, just like in augmented reality, or have their customers try it on virtually. Through a 3D configurator it is also possible to set up the shoe in different material/colour variants, thus cutting down on the costs of producing samples, while supporting wholesale business at fairs or through networks of agents and offering the possibility to create customised shoes that can be completely integrated on the e-commerce site or in the network of stores where the brand is present.

How did your project get its start?

Future Fashion was initially founded after our experience with a brand-test called DIS – Design Italian Shoes, which today represents the fastest 100% ‘Made in Italy’ customized shoe brand in the world. Today, the brand counts on a virtual catalogue of over 60 million shoes, which customers can view through a 3D configurator, allowing production to begin only on models that have sold, while keeping the costs of sample production to the bare minimum.

In a panorama overrun by virtual catalogue proposals aimed at helping footwear manufacturers save time and money, what makes you stand out from the competition?

We already approached the world of 3D virtualization in 2014, with the creation of our brand-test DIS. From here, the technology quickly evolved, above all in recent years, and this led us to technologically update our platform until arriving at the use of state-of-the-art technology like the one based on WebGL, which offers a level of reliability in 3D modelling that is without comparison. In fact, we can achieve a high degree of realistic rendering for all materials, including even the most complex ones, like for example crocodile prints or genuine crocodile, without however having to create images that are too ‘heavy’ to manage, thereby allowing for the visualization of the object-shoe on any device, including even a smartphone.

What is the best way for a company to start using your 3D virtualization technology?

In reality, the company does not have to do anything, because we offer a complete ‘turnkey’ service that makes everything very simple and efficient. Thanks to our in-house team of 3D artists, who have over 20 years of experience, we are able to provide a complete three-dimensional ‘design’ of the company’s entire collection, even if it is not initially 3D, by basing ourselves on the physical product or photo reference of it with various viewing angles. Once it has been ‘virtualized’, each individual shoe from the collection can be viewed on our platform in augmented reality also by the footwear manufacturer, thanks to our 3D viewer, or it can be customised in accordance with personal preferences by using a 3D configurator.

What kind of technological and economical investment must be made by the company?

Our business model is based on the cost of setting up the platform, which changes in accordance with the complexity of the project that must be realized for the customer-company, but which in any case remains quite affordable. There is then the cost connected to the production of 3D models, which changes in accordance with the number of models the customer would like to virtualize. More than ‘costs’ however it’s better to speak in terms of ‘investment’, because digitalized models remain the property of the footwear producer, who can use the same model for the following season, changing only the colour or material variants through the simple updating of the model at the cost of only twenty or so euros. Finally, there is the monthly fee for using the platform, which changes in accordance with the number of 3D models uploaded onto it, and which covers however also the technological updating of the platform itself.

How do you see the future of the fashion industry?

I believe that virtualization is the beginning of a new era for fashion companies, because it allows them to save time and money in production, while becoming more sustainable at the same, reducing the number of samples produced, and cutting back on waste. I believe that this is the first step towards a new world, which in just a few decades will project us directly into the metaverse. In my opinion, taking this first step in 3D creation is a unique opportunity for footwear companies to enter what will be the world of fashion tomorrow, which will be based more on 3D reality than on e-commerce.