The iconic Milan-based store adopts a strategy of crowdfunding to improve its market analysis tool, HypeAnalyzer, while repositioning itself in the Fashion district, and launching temporary stores: a virtuous example for footwear retailers 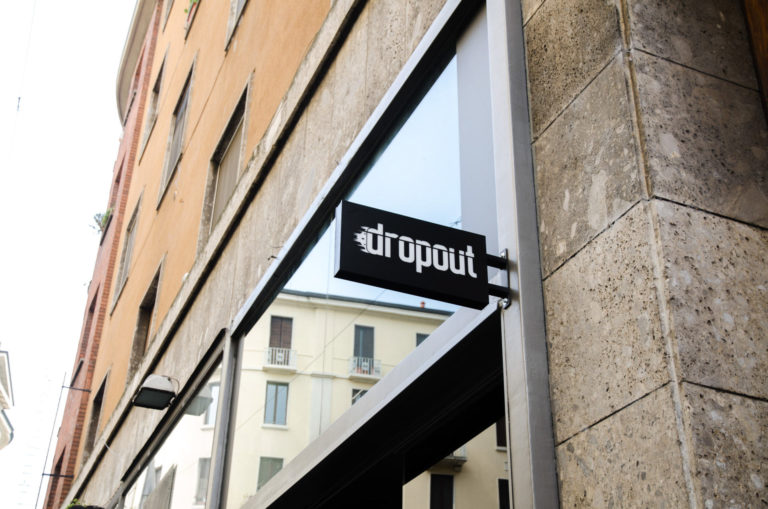 Fashion is discovering the potential of crowdfunding, the collective effort of a group of individuals to fund companies, initiatives, and special projects. The second half of 2021 has seen several names in fashion, apparel, accessories, and retail turn to this kind of financing. It is precisely from the world of footwear retail that we wanted to present the exemplary pathway undertaken by Dropout, the iconic Milan-based store of limited-edition sneakers, and speak with co-founders Kola Tytler and Stefano Zeppieri about it.

What are the origins of Dropout and how does it do business?

Kola: Dropout is a retail business specialised in the resale of limited-edition sneakers and streetwear apparel. At our store, in the centre of Milan, and on dropoutmilano.com (both launched during the second half of 2018), we sell shoes released in recent years that sold out through traditional retailers in record time. The store acts a little like a “temple” of sneakers for novices and fanatics coming from the world of sneakers, since we have a number of rare pieces on display, including the only existing pair of Jordan 1 sneakers with the Nike symbol facing backwards, estimated at 125 thousand euros, and Nike MAG, as seen in “Back to the Future”.

Closely connected to Dropout is HypeAnalyzer, a sneaker resell market analysis tool conceived by Stefano and myself between 2016 and 2017. Our website and iOS app HypeAnalyzer trace and compare thousands of sneakers every day, with the aim of identifying those with greater potential for future resale, transforming sneakers into bona fide unconventional assets. HypeAnalyzer is used by dropout for various operations: from determining the sales (and purchasing) price, to the margins of consignment, to visual merchandising in the store, to discounts and events.

The company is made up by 4 partners with completely different experiences and backgrounds: there’s me, with a degree in medicine and surgery, and I’m also the co-founder of YEEZY Mafia, the blog that provides updates and news on the sneakers of Kanye West; Andrea Canziani, a 360 degree sneaker lover that is an integral part of the Italian streetwear scene, who previously organised Sneakerness Italia (the most important national streetwear event); Federico Pasquetti, previously the store manager of the Adidas Originals flagship store and co-founder of Icon Club (agency for sports talents); and Stefano Zeppieri, with a degree in Information Technology, and previous co-founder of Outpump (the first blog of streetwear for monthly traffic in Italy).

For what reason did you choose to finance yourselves through a campaign of crowdfunding and not through other channels?

Kola: For us, the choice of equity crowdfunding was relatively easy to make: Andrea, Federico, Stefano, and I met one another thanks to the online community of streetwear and sneaker enthusiasts, and this was an excellent way for allowing users in the same circles we frequent become part of a reality we are building. Additionally, with a community as vast as ours, a successful equity crowdfunding campaign represents in and of itself a strong stance and allows for our visibility to be improved in an extremely efficient way. Every new partner is certainly a new brand ambassador of dropout!

Is it the first time you decided to use this kind of financing?

Kola: Yes, in fact, we had not previously tried to access any other kind of financing before this.

To which project/initiative is it dedicated?

Stefano: Through the equity crowdfunding campaign, we raised a capital that will allow us to further develop various aspects of our business.

We will improve HypeAnalyzer, the system at the heart of dropout. Through HypeAnalyzer, we will allow customers to buy and sell products at their real market price, while maintaining the excellent standards that characterise us.

Our intention is to move the Milan store to an area that is closer to the “fashion district”, so we can attract more clientele and undertake various marketing operations that will allow anyone to find and purchase from dropout (and on dropoutmilano.com), easily and in complete safety, the product in which they are interested.

We also are focused on launching several temporary stores over the course of the year in key Italian districts, which will allow us to bring the product closer to the occasional customer.

Kola: We chose Mamacrowd, since it is the first platform in Italy for the number of campaigns financed and capital raised in equity crowdfunding. The cooperation with Mamacrowd has also allowed us to include ALIcrowd (ELTIF di Azimut SPA) among our investors.

What was your target and how did financers react? What kind of financers backed you?

Kola: We reached the minimum target (€300k) in just under 10 hours from the opening of the round, while the maximum target of €500k was achieved after only 4 days. We approved the extension of the maximum target up to €750K, arriving at this figure on the 6th day.

In what is an “anomaly” as far as investments in the mid-term are concerned, our campaign saw the participation of a high number of youths: over a third of the retail investors were between 18-24 years old and over two-thirds were under 35.

What advice would you like to give to those in the world of fashion retail who would like to attempt financing through crowdfunding?

Kola: My advice would be to not make lightly of it: the preparation of an equity crowdfunding campaign is a lengthy process (it took us 6-8 months), costly, and demanding from a mental, psychological, and organisational standpoint. That which was fundamental for us was having an already proven business model, with objective and demonstrable parameters, and a public which, in many ways, is reflected in the faces and stories of those who are behind the dropout brand.