Assocalzaturifici, recovery is still far away

The annual assembly of Italian footwear manufacturers raises the alarm: 2015 and the first months of 2016 have been difficult, even if exports endured 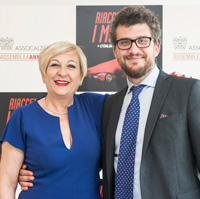 The annual assembly of Italian footwear manufacturers raises the alarm: 2015 and the first months of 2016 have been difficult, even if exports endured

Annarita Pilotti, President of Assocalzaturifici, used the Alfa Romeo Museum in Arese (Milan), where the Annual Assembly of the association took place, as a metaphor to raise her war cry “We have restarted the engines!”. A strong and resolute call for the industry to never give up despite the fact that 2015 and the first months of 2016 do not stop causing worry, a call to take inspiration from Alfa Romeo, which today is a symbol of tradition, dynamism and comeback. The Assembly offered the opportunity to give a wide and up-to-date overview of the health status, perspectives and strategies of an industry that has always been one of the pillars of Italian fashion and that employs 77 thousand workers. Many are the fronts on which the Association is moving, the hot topics that it keeps on monitoring and on which it devotes and invests a lot of energies. The defense of Made in Italy:

«We fight for a civilized rule that informs the consumer about the geographic origin of the product. We have been trying for years, without results. But we will not step back and we will not accept surrogates like voluntary certificates of origin»

says Pilotti. Another front is the recognition of China’s market economy status, which the European Commission, contrary to the Parliament, seems determined to grant and which footwear manufacturers absolutely oppose. There is then the delicate issue of economic sanctions against Russia due to the Ukrainian crisis, which indirectly but heavily affect footwear exports (in 2015 sales in Russia dropped by 32% in value and those in Ukraine by 38%).

says also Pilotti. On the fiscal front, the footwear world confirms the request that it has been reiterating to the Italian Government for a long time. As a matter of fact, companies create collections and pre-collections many times per year, investing considerable resources:

«We ask, as it happened in the Marches, to exempt these investments from tax, as the innovation of products and competitive capabilities derive from them. It would also be important to move the tax burden from business and labor to incomes, in order to ease companies and revive domestic consumption»

Finally, for Assocalzaturifici it is vital to “create a cooperation system”. Its wish is to coordinate fashion shows, events and trade shows, creating a cooperation system in Milan, fashion capital par excellence, and abroad. The aim is to promote the supply chain and get more attention from buyers. The control room for internationalization established by the Italian Government and the fashion coordination table are fundamental steps in the right direction. Assocalzaturifici, in turn, is absolutely convinced that it is possible to undertake synergistic initiatives with FIAMP (the Italian Federation of Fashion and Personal Accessories, to which Assocalzaturifici belongs) and SMI (Italian Fashion System), pooling their skills and services in the interest of Italian enterprises, and maybe to establish one single Federation for the entire fashion supply chain. REACTIONS Guests of honour at the event were the new President of Confindustria, Vincenzo Boccia, and the Undersecretary of State for Economic Development, Ivan Scalfarotto. For Boccia it is fundamental to:

«Reform state policies in order to build a modern capitalism. Fight together with trade unions to recover productivity and competitiveness. Modify the banks’ credit policies in order to list more companies on the stock exchange. Strongly ask the breaking-down of customs barriers, a measure that could double exports by 2021»

Scalfarotto, instead, defines the work of the Fashion Table as revolutionary:

«It is important for us to appear united abroad, as our competitors have been doing for a long time»

For the Italian Government the Russian situation will hardly be overcome in the near future:

«Italy is faithful to the decisions taken together with its allies even if it urges to overcome sanctions. The invitation is to look at big markets like Russia and China in a different way, exploring “suburbs”, and to stop concentrating only on big cities»

A year of Assocalzaturifici